Lately I have been a little sick of some people I know claiming to be vegetarian or vegan who are still clearly not. 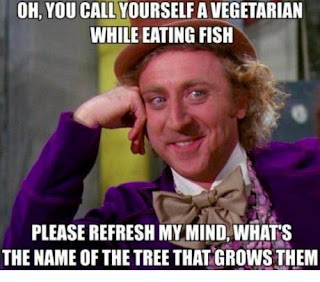 I know it is a little rich to sit here and quote my own definition of "vegetarian" and "vegan", but I will say that only cutting out beef or pork does NOT make you a vegetarian. It also doesn't mean that you don't eat meat.
Meat is the flesh of another animal. Whether it be a cow, pig, chicken, turkey, or (shock) fish!
I don't understand why someone who eats chicken or fish would presume to call themselves vegetarian? You have simply replaced eating one animal with another! (Also, someone that chooses to remove all meat except fish from their diet is called a "pescatarian")
Please don't get me wrong, I think that any reduced amount of animal products consumed by friends or family is a wonderful thing! But I don't believe that people should take something like being a vegetarian and brand themselves as such, without actually living by the moral code that comes along with it.
I stopped eating meat because I couldn't stand the idea of causing the pain of another just to satiate my own unnecessary desire for their flesh.. it is slightly repulsive to me to be honest.
I do not begrudge others who don't feel the same, I truly am not going to walk up to you on the street and pressure you into becoming a vegan! But I don't believe that anyone that does choose to eat meat (from any animal) should then brand themselves as something they are not.