It's federal election time again here in Australia.. We're only 2 weeks away from the cardboard booths, ridiculously large sheets of paper, and the head-down walk of shame past the local candidates wanting to shake your hand (it's FLU season people!).
Politicians are generally the same world-wide - there are plenty of gaffes, dorky dancing, and oh so many ads - thankfully we don't watch TV during the week. 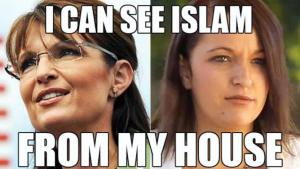 One of the many memes of this election - Sarah Palin / Stephanie Banister
I fear this election is not showing the world how intelligent our nation is... really! It is terrifying that people might group Australians with the likes of Stephanie Banister, Tony Abbott (including the wider Liberal community), and James Diaz.
﻿
Seriously! Australians invented the refrigerator, the notepad, zinc, Hills Hoist clotheslines, cask wine, and the Ute (utility vehicle).... We are obviously not all as silly as our politicians would like everyone to believe.

This is all without mentioning that Julian Assange is now running for senate with the Wikileaks party....

I am not saying that I am against all politics (can I hear anarchy?), I just think that a lot of people would feel more engaged (*cough* youth *cough*) if things were a little less ridiculous -..I know, I know.. silly notion.. -and maybe more centred on the actual issues?? (cutting education funding may need addressing some time soon..)
I have always believed in making a conscientious vote, and attempting to know as much as possible about the party that I am choosing.. that being said, I generally don't change my opinions on parties once I've decided, and have always voted the same way.. but at least it is an informed decision.
I urge people not to walk into the polling booth on the Saturday and pick a party at random just because it has "sex", "gun" or "fishing" in the name..
Voting in Australia is compulsory, and I think that has made a lot of young people completely switch off - being told you have to do something has never made people too interested in doing it, has it? (how many times did you refuse to clean your room when you were told you had to?)
Maybe they should try engaging with youth? I was completely ignored at a train station by a local member (who shall remain un-shamed). She was handing out fliers for her party and skipped me completely even though I was obviously interested in receiving what she had to give me(I had forgotten my book that day). I'm not sure if I may have looked under-age that day, or she thought I looked too left-wing to be interested, but I thought that seemed slightly discriminatory and counter-productive.

What are elections like where you are? Is there as much ridiculousness? Do you switch off, or does it make you more interested when there are things to keep you entertained through the process?