Well! What an eventful few months it has been.. Few months? Hmm.. Possibly a year.. huh!
I thought I'd come back on here more as an outlet for everything that I have been doing recently, and possibly put up a few fancy recipes I've been working on lately.

My life has changed significantly since I last posted. My partner and I split, I moved to a new house, and met some of the most amazing people in the world!
I also went overseas (England, Scotland, Wales, and back to Hungary!), and have started a new relationship with a fantastic person.

Before you ask, yes I still get to see my dogs (Suzie and Radley), though my ex has custody, we are still good friends, which allows me to spend as much time with them as I like. I do have custody of Domino (unfriendly cat), who has taken to living with Kate and myself, as she is now being fed double.

I am still working at the vegan bakery, though I have been given an amazing opportunity to do some catering for another cafe in Canberra. Which means my own recipes, and much better hours!

The amazing people I've met include the beautiful Katie, who has become one of the most important people in my life. She is definitely the one person I think I can tell anything at all without judgement. She let me cry at her after my break up with Travis, she helped me to get over that with lots of whisky and gin, and she even let me dye her hair blue (what a trooper)! She is an extremely smart lady who can play nearly every instrument you throw at her, and can drink most people under the table.
The other amazing person in my life is Seb.
Seb and I met a few months after the split, and it just so happened that he was working in the bar that I frequented with work colleagues while I was drowning myself in liquor to numb any feelings of loss and pain (mostly due to the loss of Suzie and Radley). He caught my eye immediately, though I hesitated to act due to the fact that he was now my barman (and nobody liked to screw things up with a good barman), and so I let my little infatuation go for a while.
Then a while later I got very drunk.
Possibly drunker than that.
Then drunker.
And I (very indelicately) hit on him.
He reciprocated, I stalked him on Facebook, and the rest is history!
We've only been dating for ten months, but things seem to be traveling along smoothly. My parents adore him, he is extremely smart (studying industrial design at the University of Canberra), hard working, and an amazing person to talk to. Katie loves him too, which means our dates are frequently crashed..
Needless to say, I love him.

OK! Well it seems we're mostly caught up! If I think of anything else, I'll be sure to put it up, but for now I'll start collating some of my new recipes for putting up!

So school has really been trying to make life hard for me.. Since I refuse to buy anything non-vegan, and I have to make most of the things we bake at school, at home, I basically have to try my damnedest to make these very NON vegan recipes, vegan :-S

Last week it was croissants, which you can check out here (they turned out BEAUTIFULLY!)

So this week I decided, as my last week of having to bake using yeast, to make brioche. Now i'm not sure if you're familiar with it, but if you aren't (as I wasn't before baking in class), it is a french pastry, traditionally made of many eggs and LOTS of butter, which make it basically a really unhealthy form of bread.. YUM!

At school this meant using a lot of butter, and lots of eggs to make this gloopy dough, which when baked turned into a very very very fatty muffin (not sure why, but they made us bake it in muffin tins).

This is how I made my home-made vegan brioche (which I divided into smaller amounts, as a larger one would likely give you a heart attack):

So we like these plain, or with some Nuttelex, but you can fill them with so many things! We put some Sweet Williams chocolate pieces inside some, cut some open and buttered them with chocolate spread, peanut butter, Tofutti Better than Cream Cheese, the possibilities are endless!
At school they made savoury spreads for them, so you can always make something yummy out of the cream cheese! 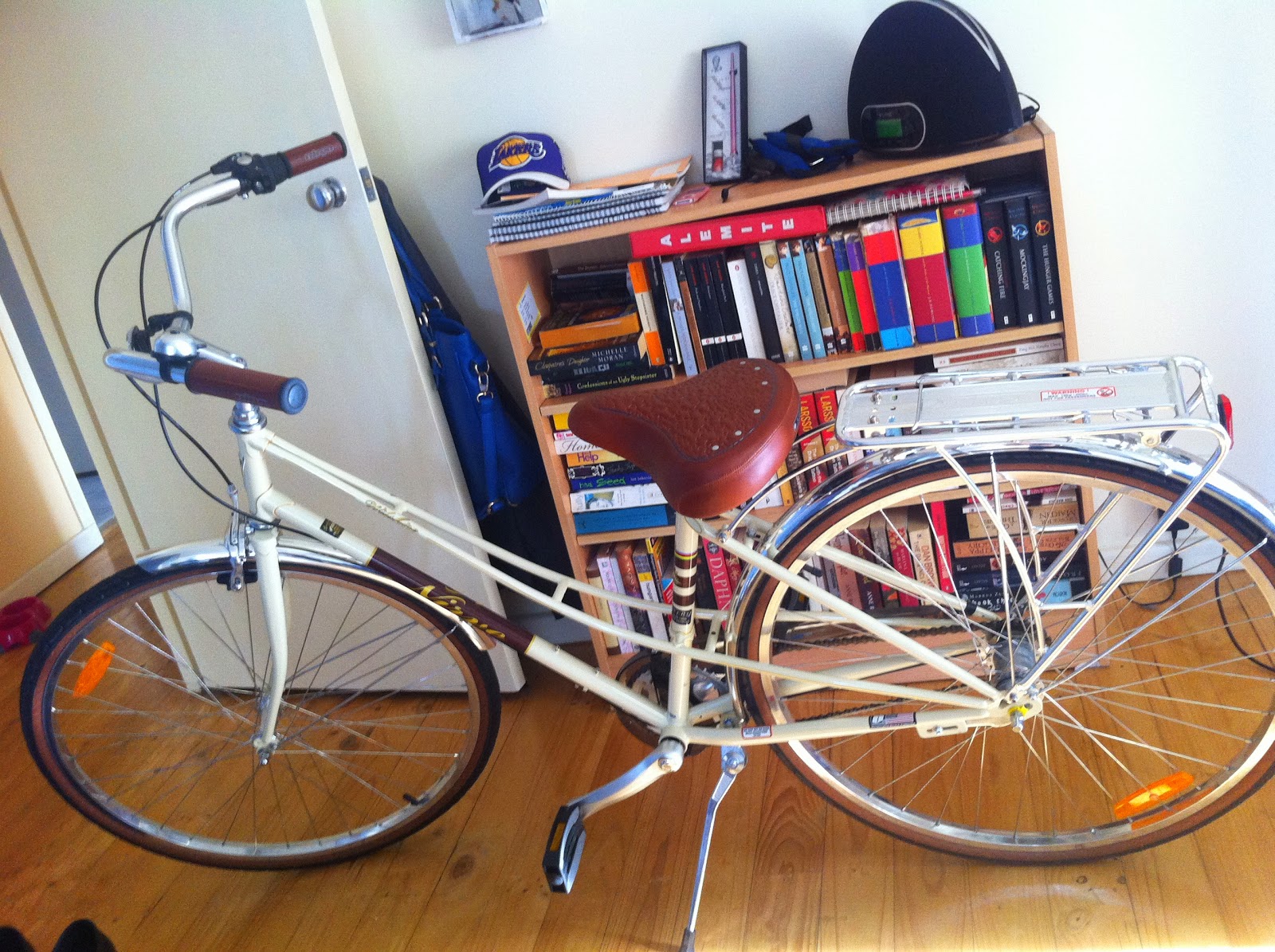 Travis bought me a new bicycle today! How pretty is it?? I'm in love <3
I've been complaining since we got here about how expensive it is to park here, especially on school days, where I have to pay nearly $10 (in coin) to park for the day… Ridiculous! Not to mention when I go to the shops!
So now my plan is to ride my bike to school, to the shops, and to work!

Yay for helping the planet!

Lucky for me, Canberra is a city for cyclists :)

Do you ride a bike in stead of driving places?
Posted by Unknown at 23:43 No comments:

Saturday has become my favourite day of the week lately. Ever since Travis has started his new job, he hasn't had to work Saturdays anymore, which is fantastic! It means we now have an entire weekend together.
Our Saturdays tend to go like this:
Wake up late, feed the dogs, have a relaxing breakfast, get all of our bags together and go to the markets, come home, make some food from our new produce, then relax.
It's so lovely!

The markets we've been going to is the EPIC markets at the Exhibition Park in Canberra (E.P.I.C), on the north side. They're not far from our house, so it's a short 5 minute drive to get there, and there is always good parking.
We've found that it is easier to just walk around and pick things as we see them, rather than taking a list, then getting anxious when there isn't things from our list there due to the climate in our area, or the season.
So the fun part about market shopping is that we find things there that look fantastic (the pumpkins at the moment are beautiful!), and decide what we will eat that week from there!
So this week we got a half pumpkin, a bunch of chinese broccoli, some plain broccoli, swiss brown and field mushrooms, apples, sweet potato, a cute eggplant, and a ridiculously large zucchini! (For real guys, this zucchini is MASSIVE!)

After the markets this week Trav had to do some work, so I decided I wanted to bake some bread. It is one of the most relaxing and rewarding jobs to do at home I think. Mainly because it is just such a home-y thing to do, it saves a bit of money (if you eat as much bread as we do), and the smell is just intoxicating! There aren't many smells that can top a fresh bakes bread in the oven..
Flour is so cheap, and the other ingredients are always sitting in your pantry anyway, and you can make it however you like it! Next weekend I'm thinking of getting some yummy olives to put in a loaf, and having one that is all for me :) (Travis loathes olives).

After baking, we sat down and watch some of the first season of 90210 (the 1990's version), and although Travis finds it insipid, we both spent most of the night watching and laughing at their oversized computers and "mobile" phones.

For dinner we decided to make home-made pizza and twists, topped with fresh garlic and home-made queso cheese (I'll post a recipe, it is DE-LISH!). The pizza turned out amazing, and the twists were great as a starter!
I know, I know, not the healthiest day for us, but hey! That's what Saturdays are for aren't they?

Do you bake your own bread at home? What do you put in yours?
Posted by Unknown at 20:15 No comments:


As you may have read in my previous post, we've just moved to the beautiful city of Canberra, are living in an amazing little house in the inner suburbs, I'm studying patisserie at a school near us (which is amazing!), and I recently got a new job at a vegan bakery!! BAKING!

It IS pretty amazing though.
The cafe is called Sweet Bones Bakery, and it is located on Lonsdale St, within the Lonsdale St Traders in Braddon (a suburb just out of the city). It is very groovy, and hip, and I am far too nerdy to be socially adequate in many of their cool situations, but it is seriously, the best job I've ever had!
They bake vegan wedding cakes and cupcakes, and make so many cool things! I've so far made their lemon cheesecake (YUM), cupcakes, cookies, brownies, muffins, pretzels (yummy!) and I'm sure there's more.

The only down side to this job is that I am surrounded by delicious and decadent vegan food all day, and there are chefs there who are willing to make me a tofu burger any time.. Sounds upsetting right? Yeah, well my waistline is not happy about it!!

:-P So if any of you are ever in Canberra, feel free to drop in and try some ah-mazing food and come say hello!

Did any of you check out my vegan croissant recipe? It's up! And it's beautiful :) PLEASE tell me if you make them, and if they turn out well!

For anyone who is vegan, I know there are many things you think you'll never eat again, including delicious flaky croissants. 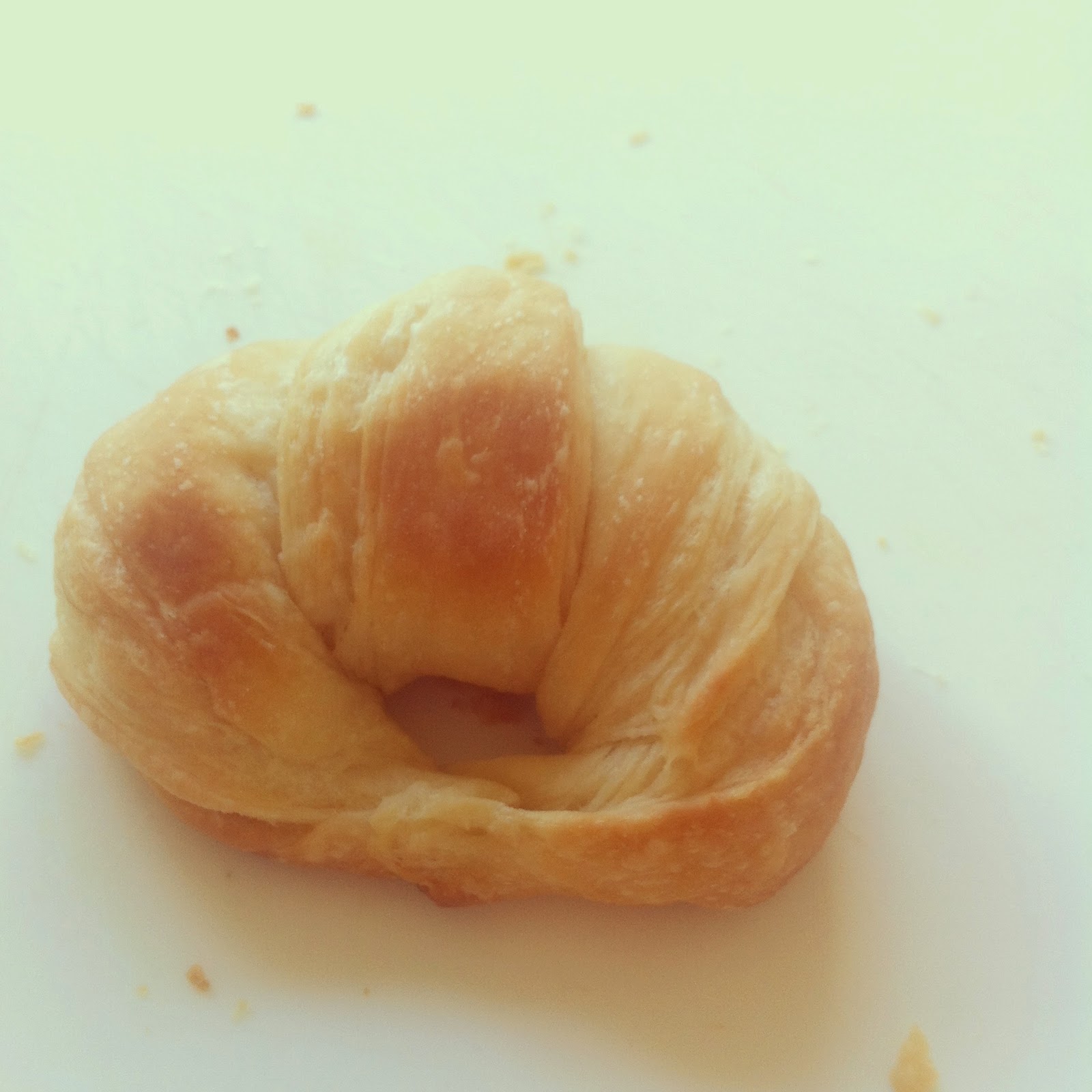 These babies were made using completely cruelty free ingredients! 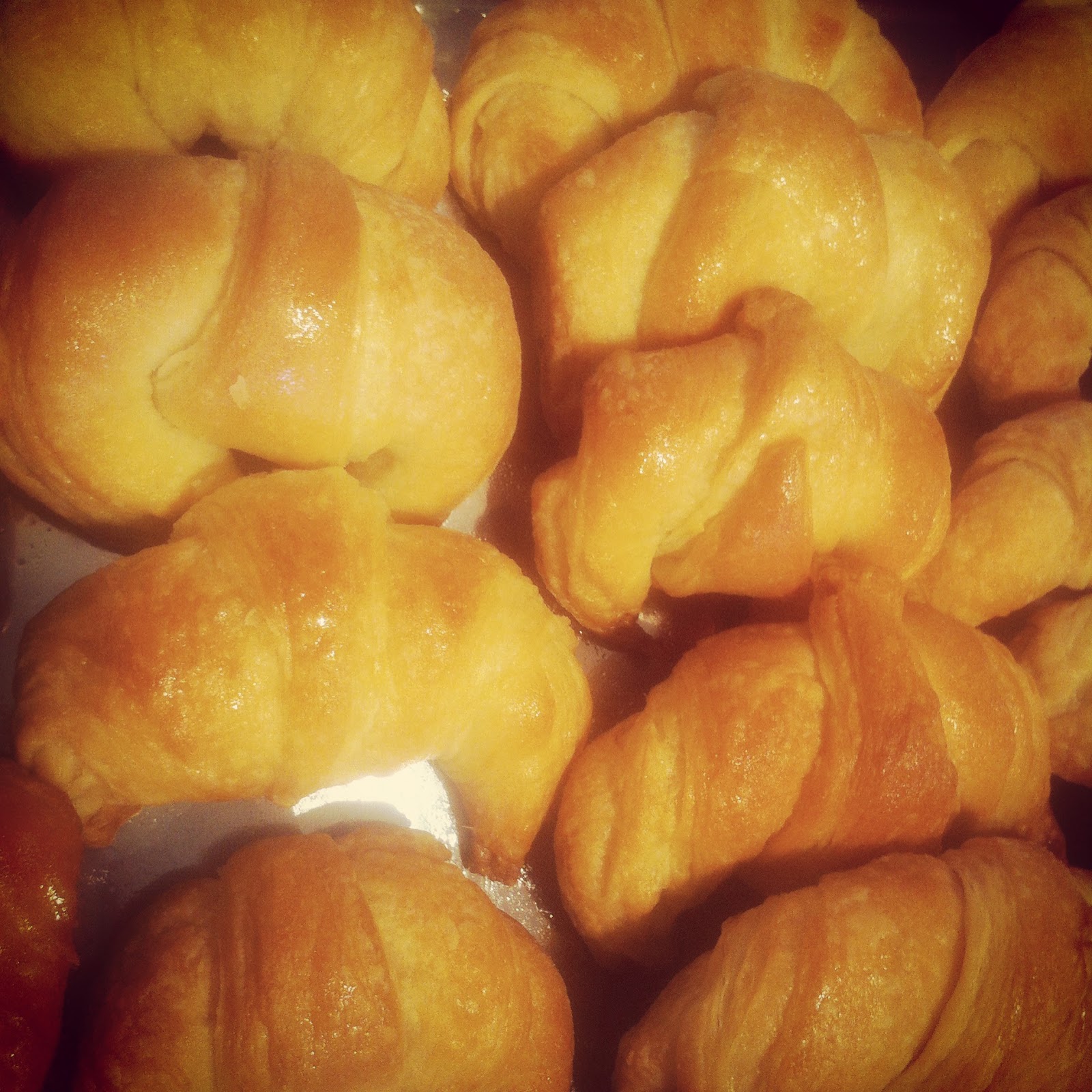 And we know they're not perfect, they're all a little oddly shaped. But they are all delicious!

This is what happened when I pulled one apart:

Of course I quickly smothered it in more Nuttelex and devoured it.

Enough drooling over the pictures! Let's get baking!!!!

60g   Shortening (I used Crisco, but you can use any form of vegetable shortening)
100g Vegan margarine - preferably with a high fat content (I used Nuttelex Original)

Ta Daaaa! Delicious VEGAN croissants for everyone to enjoy :)

Let me know how you go, and if you can think of anything I may have missed… xo

I know what all of you are thinking:

FEAR NOT! Vegan croissants are possible!

I made this baby today after many many weeks of procrastinating:

I am so gosh-darned proud of myself right now!