What I'm reading at the moment

There hasn't been a time since childhood when I haven't been reading a book (or three). I have a stack of at least 5 books next to my bed (even though I generally don't read in bed I just realised.. hmm), and I have around 200 books on my digital reader I am attempting to work my way through (mostly the free classics that are complementary with the device).
I find it comforting to know that I have something to read when I am on the train, or relaxing at home. Which obviously leads to panic and depression when I have finished all of the books I was reading, and am left desolate and bookless until I can find something new (or old) to fill the void.

At the moment I am in the middle of the George R.R. Martin series A Song of Ice and Fire (who isn't?) and I am currently up to book four A Feast for Crows.


For those that have never heard of A Song of Ice and Fire, or watched the HBO series Game of Thrones (where have you been?), it is a fantasy series set in the fictional land of Westeros, which focuses primarily on the fight for the coveted Iron Throne of Westeros, and indirectly on the lives of the Starks of Winterfell.
So it is basically told in lots of different voices of characters throughout the series, and each book changes narrators as George R.R. Martin picks and chooses who he will unceremoniously slaughter, much to your joy or dismay.

I won't give out any spoilers, because I have no interest in making enemies at this stage, but I will say that everyone I know that has read, or watched this series has become captivated, no matter if they are fans of the fantasy genre or not (generally I am not), so I encourage everyone to give it a read/watch.
...even though I can't get my very open minded boyfriend to watch it..(though I have a feeling that may be because I have already ruined it for him by gasping in horror and shock at every turn of the page.. and by telling him everything that has happened).

Generally as I read something modern, I will be tackling a classic at the same time so that I can give my brain a little respite. At the moment that classic is the Shakespearean "comedy" All's Well That Ends Well. It isn't much of an epic, and it is relatively light, though I still like to read Shakespeare in small doses, otherwise I find that I start thinking in iambic pentameter.

If you'd like to see more of what I'm reading right now, and what I've read recently, take a look at my Goodreads page!

If you're a fan of Game of Thrones, or just looking for a giggle, don't forget to check out my Pinterest  page. 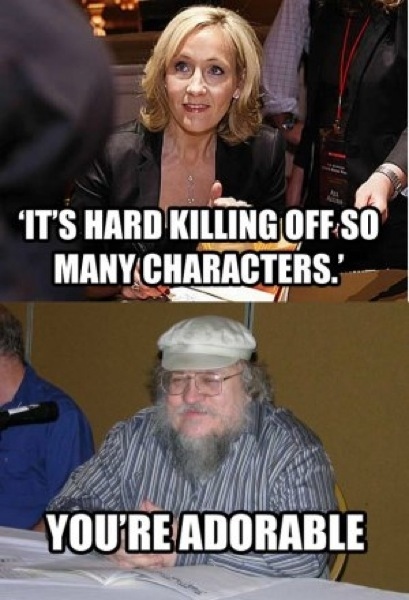