Documentares that helped us transition to Veganism

Lately Trav and I have been trying to learn more about what we eat... or don't eat. Which means watching a lot of documentaries! (Not to mention the hours of research done in our own time.)

I thought I'd present to you a short list of a few of the documentaries that have impacted on us the most - whether it be the message or the story, I think there is something in this list for anyone interested in learning  a little more about where their food comes from! (Whether you're vegan, vego or omnivore!)

Our first foray into the world of factory farming expose was Earthlings.. We jumped right into the deep end with this one....

It took us 2 nights to watch - not because of the length, but the content. I simply couldn't sit and watch a lot of it (I couldn't see the screen at times through the tears and hiccups).
It is a beautifully created masterpiece (narrated by Joaquin Pheonix, score by Moby) full of gut-wrenching footage of some truly inhumane practices including the "kosher" slaughter of a cow, euthanizing cats and dogs, and the general disgusting practices within places like slaughterhouses, factory farms and circuses.
I would recommend everyone watch it, but I would also recommend a box of tissues.
You can watch Earthlings for free on their website.

Fat, Sick and Nearly Dead
I LOVE documentaries like this one! I love transformations, people gaining new life skills (healthy eating), and I love seeing people come out of their shell!
This documentary starts by following Joe Cross, and Australian businessman, from Sydney to America on a quest for better health.... by juicing...

So I have always been a little sceptical of juicing being that amazing for anybody, but this documentary showed how much Joe's health improved just by drinking green juices for 60 days! Everything is improved for him by fasting, then by following a vegan diet after the 60 days of fasting is over.
It is amazing to watch him become visibly healthier.
Joe then meets another man who is overweight and sick, and he then helps him to start his own journey.. It is quite amazing. I sat there absolutely floored by the improvements in both men.
After Trav and I watched this one we both started raving on about buying a juicer.. it is yet to happen, but I'm sure it will... We're both suckers for a health craze. (unless its an ab machine.. we're not that silly)
The only negative I can think of with this film is Joe's accent... I guess I understand that the Australian accent sounds funnier when it is exaggerated (loved travelling in the US and replying to the "where y'all from?" with "'Straya".. because it's fun), but in this film, it made Joe sound uneducated every single time he said "g'day mate".... Ugh. The Crocodile Dundee/Steve Irwin accent isn't an accurate representation of how we truly speak... some of us can be quite well spoken. (Please do NOT look up Australian accents on YouTube)
This film can be bought on Amazon.

Vegucated is the most recent film we've watched. I found this while looking at a few other films about veganism. This one is about a vegan who decides to try to convert 3 meat-lovers (found on Craigslist) to veganism (makes it sound like a religion! Haha).
So the idea behind this is that if someone tries it, and sees how easy it is to live vegan, then they will realise that it isn't so crazy/extreme/hard after all! It's a good idea, and all of the people she enlisted showed amazing signs of improved health after only 6 weeks, but the fact that some were resistant to the change made it a little more of an uphill battle. There was one girl that frustrated me to no end, and it was like watching an episode of a reality tv show through parts of it, but overall I enjoyed watching people's perception of veganism change throughout the course of their experiment. :-)

Forks Over Knives is the one that changed Travis' mind about veganism. He was a little undecided on the whole idea until we watched this one.. And I am eternally grateful to T. Colin Campbell and Caldwel B. Esselstyn for the amazing research they have done! 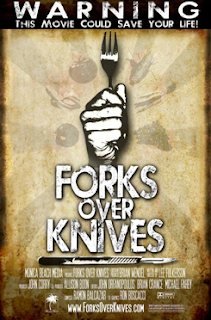 This film has definitely been my favourite of all that we have watched so far. The research that was done prior to this film being made is SO thorough and comprehensive, that I don't really understand how everyone isn't living vegan? The evidence is there that this diet can prevent so many issues and diseases, and yet people are still dying from heart disease, diabetes etc. every day when some of these deaths could have easily been prevented by eating a healthier diet.
Travis' reaction to this movie was: "I don't want to die from drinking milk" and from that moment he went from vegetarian to a devout vegan. <3

Supersize Me is a common one that most people would have heard of, and our reaction was the same as most peoples to that one - pure disgust.
The World According to Monsanto is one that isn't focused on veganism, but is about the big business of food, and in my opinion is one that most people should watch to learn where their food comes from, and who is profiting most from small businesses/farms losses.
I think it is a good idea for people to educate themselves on not only what they're eating, but where the food they're eating comes from - GMO's are bad y'all.


Have you watched any documentaries or films that have been particularly inspiring lately? I'd love to hear about ones you've watched that have interested you, or made you make a change in your life that you wouldn't normally have considered. :-)